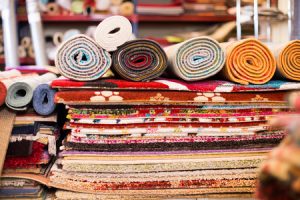 What are some of the reasons to avoid chain stores when purchasing carpet?

First, there’s the “bait-and-switch” problem, whereas a chain store advertises carpeting at a certain low price– say, $9.99 a square yard– but when you actually want to buy it they end up talking you into a more expensive carpet. If you see an ad that says something like “Three rooms of carpeting installed for a super low price,” chances are they’re going to show you that deal but then talk you into something more expensive. They’ll say something like, “Well, that’s okay but you really don’t want that– you want this instead.” And most people will go along with what the salesperson talks them into– for more money!

Next, there’s the “private label” scam. It’s where a chain store buys the use of a name to put on the carpeting they have, whether or not it’s really up to the standards of the brand name they’re selling you. Will you really know who made the carpet? Probably not. Also, watch out when they say “lowest price guaranteed” when it comes to “their private label,” since you wouldn’t be able to find that exact same carpeting anywhere else– only they have it, so their price is the only price and can’t easily be compared with other carpeting from other chain stores!

Not the Carpet I Thought it Was

Thirdly, sometimes chain stores use “the old switcheroo,” whereas you think you’re getting the carpet you saw in the store, but when it gets delivered it’s not the same. Typically, you’ll end up getting a carpet of lesser quality, and you might suspect something is “up” if the texture or thickness feels differently underfoot at your house than it did in the store.

Finally, if it sounds too good to be true, it probably is. If a chain store tells you they’ll install your new carpet for your whole house for a super low price, beware– there will probably be “extra charges” in the bill so they make their profit. For instance, the labor costs will offset the carpet costs, and you’ll be left with a big bill you didn’t want.

Avoid the chains; come to Carpet Closeouts instead and get a FREE quote.

Check out these videos!

WE LOOK FORWARD TO WORKING WITH YOU